Like any good adventurer, I prefer to do a bit of research before we head out the door. Sometimes when I hear the phrase, “Not open to the public,” my circuits get curiously confused. Instead of taking the logical next step (curling up into a ball and admitting defeat), I typically decide to profess my love of the place via email and hope for the best.

Such was the case before a very important trip. My (now) hubs and I were a few weeks out from getting married and I wanted to get him a cool wedding gift that we’d look back on fondly many years later. I immediately knew that getting him a “thing” just wouldn’t cut it. A couple of years ago I came to the conclusion that stuff and things won’t fit in the overhead compartment, so travel light and pack your life full of memorable experiences. Stuff is just stuff, but memories have a much longer shelf life.

I started thinking about hubs and things he likes. That didn’t take long. Hubs is a minimalist and not a big fan of stuff. Eek. Le sigh. I knew I wanted to do something cool, but how the heck would I pull this off? Dang it. I suppose those “His” and “Hers” Kate Spade luggage tags I saw weren’t going to solve this problem.

Then it came to me. We don’t “celebrate” many things with a big to do, but every now and then a special occasion will come around and hubs mentioned awhile back that there is one bottle of bubbles from a brand that he particularly enjoys. On his birthday a few years back I tracked said bottle of effervescent delight down. It was a labor of love and took some research to find it at a very cool local spot, Beltramo’s Wines & Spirits, which sadly is shuttering its doors. (Okay, okay, I guess after 134 years they do deserve to retire and drink some lovely champagne themselves, but I’ll still miss you Belt!)

Laurent-Perrier is not the kind of brand rappers like 50 Cent give shout outs to, but that’s part of what makes its effervescent elixir even more irresistible.

Laurent-Perrier Grand Siècle is in the $100+ range (keeping it safely stowed on the special occasion side of your beverage wish list), but it isn’t as pricey as the Dom Pérignon Mr. Jackson likes to reference in his songs. The other rather endearing thing about it is that it isn’t stocked on the shelves of every Safeway either.

I felt like I was on to something. Synapses were firing, dots were connecting. We were going to be in France for our honeymoon. Laurent-Perrier is based in France. Sure we weren’t going to be anywhere near Champagne, but I could figure out a way to “accidentally” Waze us to the land of bubbles and still surprise hubs without him knowing why were going in that direction and then I hit the speed bump. “No public tours.” No!

So I lobbed a Hail Mary. I tracked down an email address for the champagne house that has been around since 1812, pleaded my case in broken French and in English too, and fully braced myself for not even an auto reply peep back.

Less than 24 hours later there was a response in my inbox. While the house was closed on the weekend, Laurent-Perrier would be happy to have us visit during a weekday, so we could learn a bit more about the brand and its bubbles. Parfait!

Before we met our incredible host, Frédérique, we were greeted by a fun statue in the courtyard which read, “Ne Buvez Jamais l’Eau.” “Never drink water,” seemed like a fantastic way to kick of an afternoon filled with champagne tasting and cave wandering. 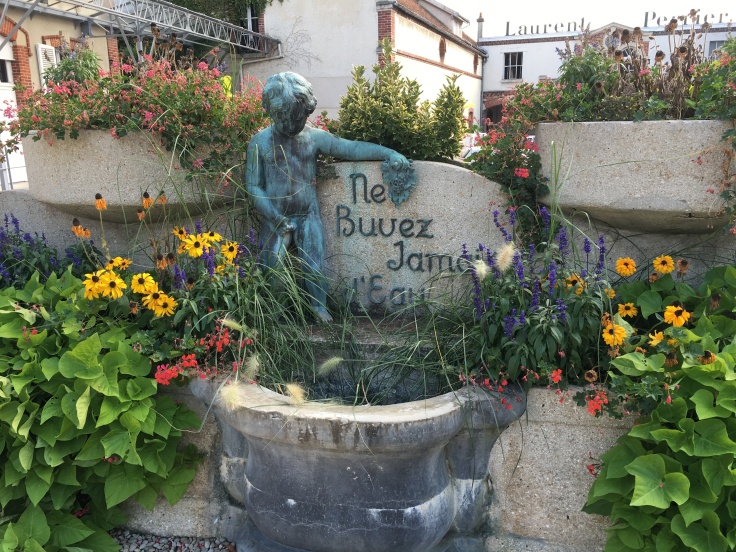 In the front lobby we were greeted by fabulous Frédérique. Frédérique brought us downstairs and lovingly told us about the history of the house. Despite having spent decades with the brand, Frédérique has a palapable energy and enthusiasm for Laurent-Perrier that’s contagious.

The house was founded by André-Michel Pierlot. Pierlot passed it on to his son. When Pierlot’s son had no heirs it was Eugène Laurent, the cellar master, who took the helm. After the cellar master died his widow, Mathilde Emilie Perrier, took over the business and gave the label its legendary name, “Veuve Laurent-Perrier” (“veuve” means widow in French and “Laurent-Perrier” was the result of the widow combining her maiden name and her beloved’s last name). The house would stay in the family until the estate was sold to the de Nonancourt family in 1939. To this day, running the estate is still a de Nonancourt family affair. The gorgeous granddaughters of Marie-Louise de Nanancourt, Alexandra Pereyre de Nonancourt and Stéphanie Meneux de Nonancourt, oversee operations of the brand and sit on Laurent-Perrier’s management board. To date Laurent-Perrier is one of the few family-owned champagne houses listed on the French stock exchange. 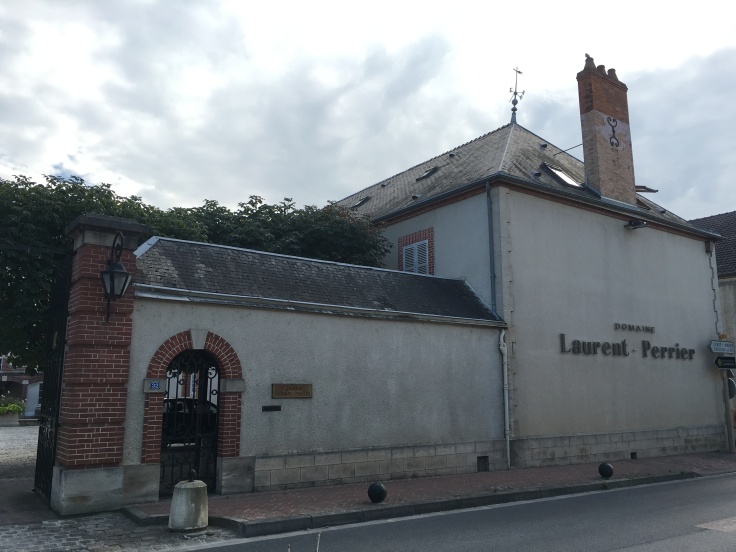 Frédérique mentioned to us that every year Laurent-Perrier produces a Cuvée Rosé, but the vintage Alexandra Rosé happens on its own schedule. (Including its debut in 1982, there have only been a total of seven of the vintages produced in the history of the house.) It takes exceptional conditions to produce the Alexandra Rosé. The vintage occurs only when the pinot noir and chardonnay grapes ripen at the exact same time resulting in a salmon pink color and a perfect balance of masculine and feminine flavors.

After our history lesson, we headed to the caves. Made up of chalk (which is the key to maintaining a consistent temperature and humidity level), Laurent-Perrier’s caves snake for miles underground. While wandering the cool halls, we were able to see Laurent-Perrier’s extensive library of bottles. Mold, which thrives in the cool damp cave systems, drapes over the catalogs of bottles as though they were a protective cape. 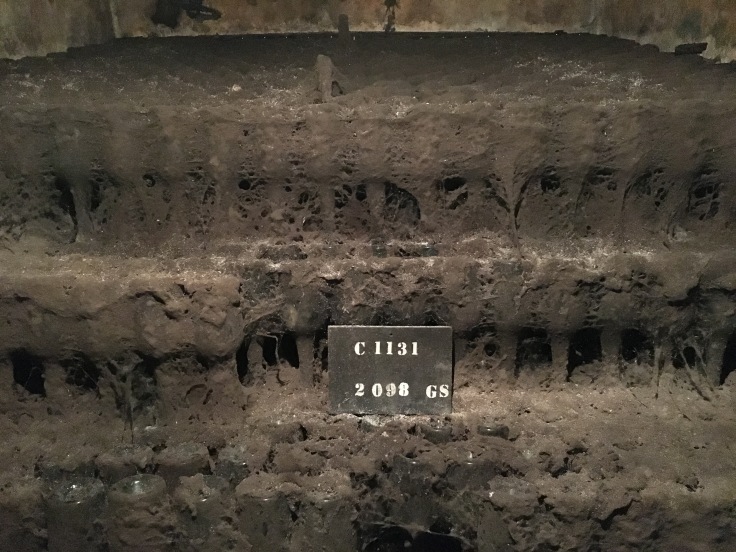 The grand finale was a tasting in one of Laurent-Perrier’s beautifully appointed rooms. In addition to tasting the Cuvée Rosé Frédérique had told us about, we were also able to give the Brut and the Brut Millésimé a whirl.

The Brut was an easy bunch of bubbles. Its flavor seemed like an affable friend that could get along with just about anyone (happy to hang out solo as an apértif or to stand beside a seafood chowder or even poultry dishes).

The Brut Millesimé was a bit more finicky and tasted as though it might do best paired with delicate white meats such as crab and scallops. 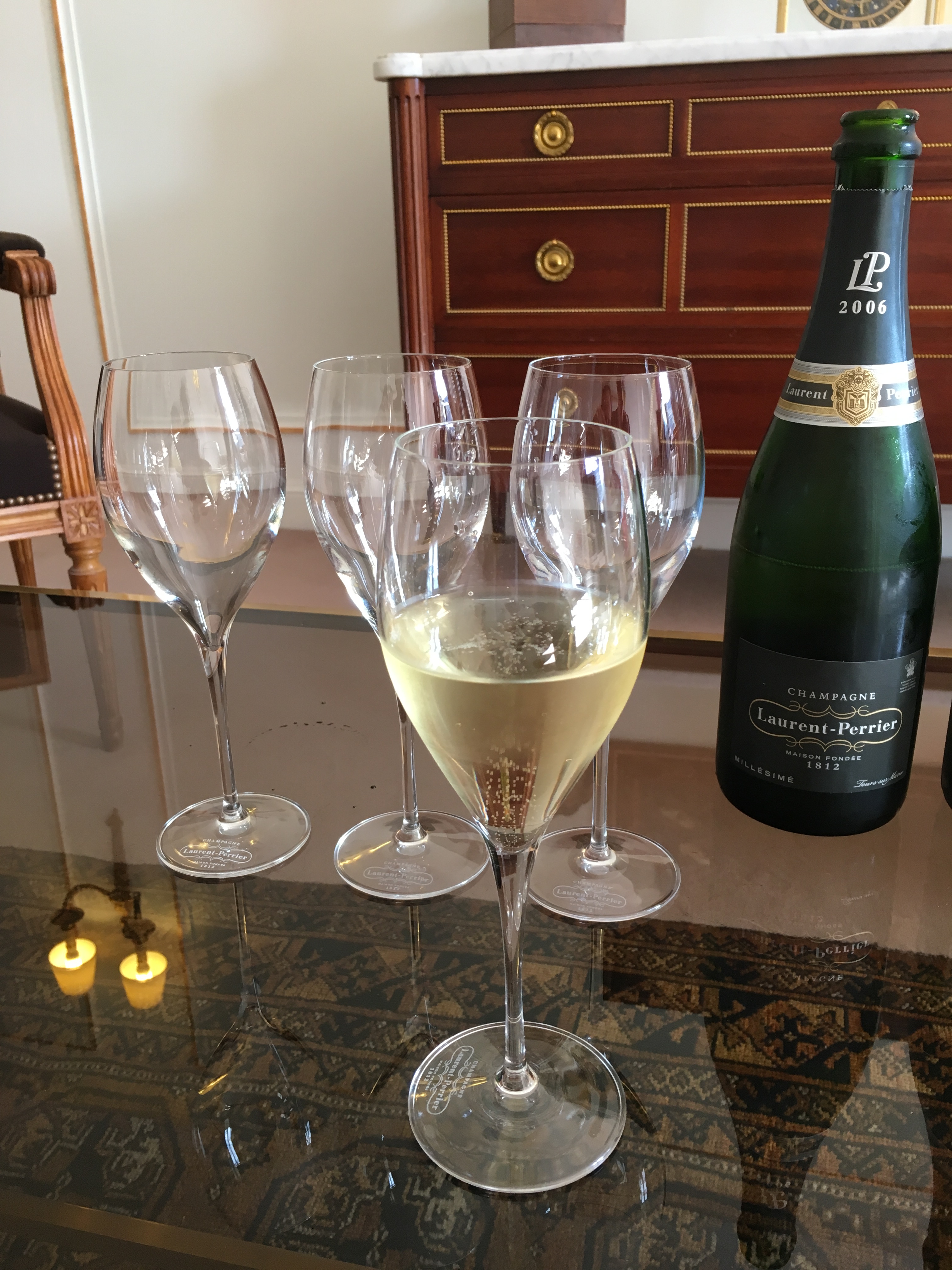 After many hours together (Frédérique truly was an angel patiently answering our many questions), this honeymooning couple was even more in love with a brand we had admired from afar. Touring the grounds was a magical way to learn more about not only Laurent-Perrier, but the Champagne terroir and the history of its namesake bubbly beverage. When we asked Frédérique why she had spent decades with LP, she responded by telling us that it truly is a family. “It’s about honoring tradition,” Frédérique told us before we parted ways. I, for one, was happy a bit of persistence paid off and will be happy to honor only the most special of occasions and new traditions (such as our wedding anniversary) with a fresh crisp flute of Laurent-Perrier in my hand.

Laurent-Perrier
32, Avenue de Champagne, 51150 Tours-sur-Marne, France
Not Open to the Public (Tours by Appointment Only)