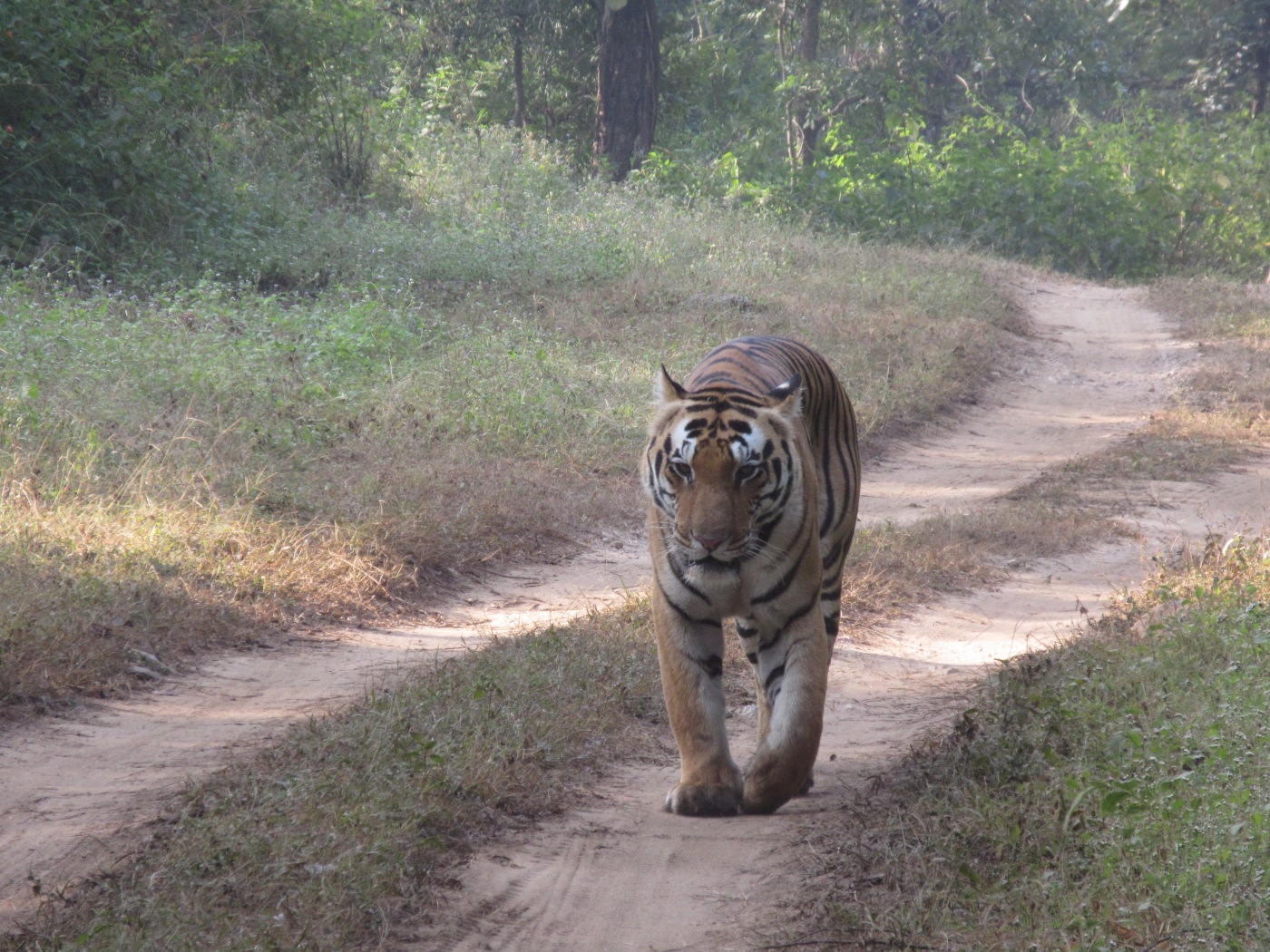 The second day I saw a tiger I cried and had to stop shooting photos with my camera. It wasn’t the first time I locked my eyes on Link 7 Male. Even though his name doesn’t exactly evoke (human) lady lust or sexy leading man appeal, the way say a name like Brad or a Channing might, Link 7 Male was the most amazing specimen of the opposite sex I had ever laid eyes on (besides my hubby of course).

There was something magical in the way the four and a half year old male royal Bengal tiger moved in that moment. It was the way he lifted his massive left paw, in a simultaneously heavy and yet effortless way, off the dirt track of Link 7 road (the stretch of road in Kanha National Park that he’s named after).

His movements made my eyes well up the same way they did when I watched the movie Powder. For the record, my tiger tear was way less embarrassing than the Powder incident of 1995, and, no, Titanic did not move me to tears.

Put aside taking pictures or spotting these amazing creatures IRL (in real life) for just a moment, and you’ll come to find that the odds of even finding evidence of a wild tiger these days (whether it be via an awe inspiring fresh paw print or claw marks on trees) are shockingly slim, hence my waterworks. 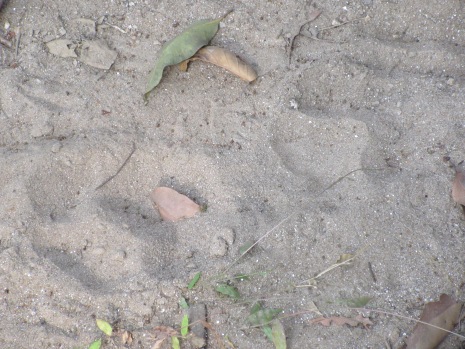 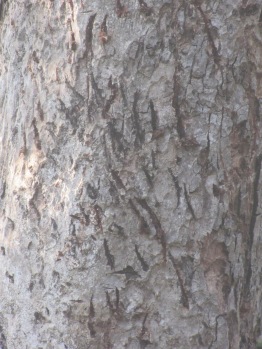 A Close Up of Claw Marks 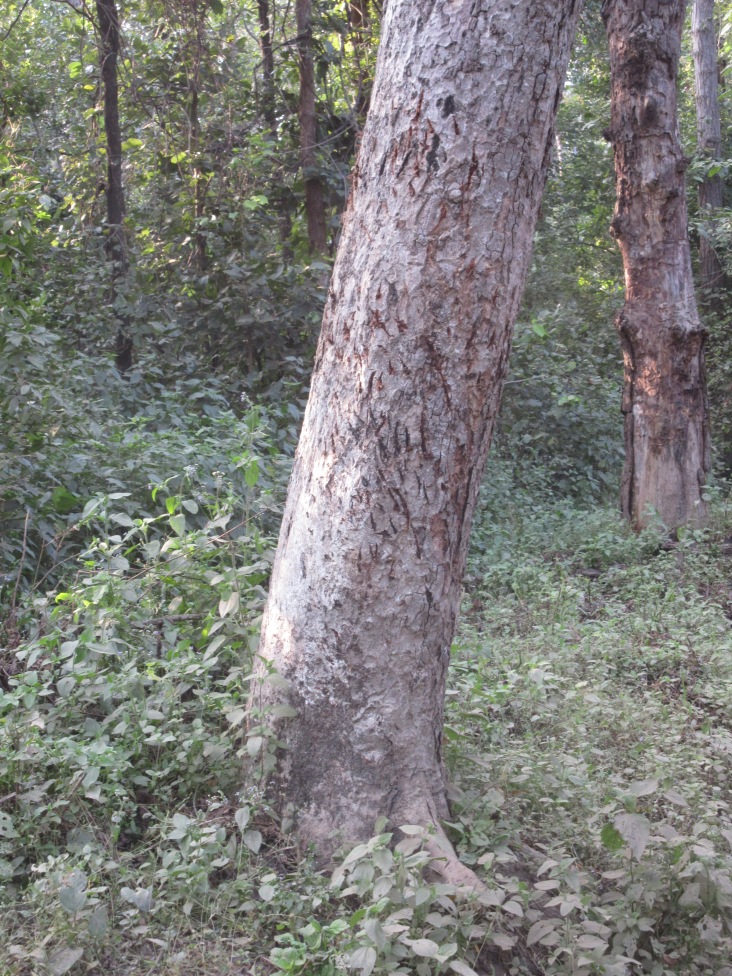 The entire global wild tiger population is estimated to be a scant 3,890 known animals according to The World Wildlife Fund (WWF).

This year India alone has already lost 60 of its iconic orange furry inhabitants according to Tigernet. Tigernet is a database compiled by the government of India’s National Tiger Conservation Authority and TRAFFIC (a joint conservation program of WWF and the International Union for Conservation of Nature or IUCN).

Yes, you just read that right and those are frightening figures.

At the current rate tigers, one of the most legendary critters at the top of the global food chain could become extinct in our lifetime. Sadly, striped six hundred pound cats very well could become a thing of the past.

It’s a lethal mix of poaching (for their whiskers, tails and even their coats) and humans encroaching on big cat habitat (which can disrupt mating corridors, result in vehicle deaths, poisoning and even electrocution from the high voltage fences farmers use to protect livestock).

Other factors also threaten the survival of the majestic animals’ who inspired The Jungle Book‘s engrossing villain, Shere Khan. The big cats are notoriously solitary, intensely territorial and then there’s the fact that cute tiger cubs just might have the worst dead beat dads in the animal kingdom. Unlike lions (who sometimes rely on the pride and even male lions to help shoulder the burden of raising a young cub (see Exhibit A, “Lion love: Father meets his cub for the first time“), female tigers have a tough time. In addition to keeping their eyes out for cub predators like leopards, vigilant female tigers also have the extra added new mom stress of having to worry about male tigers killing their young.

In addition to Banjaar Tola, here’s a list of other neat little local spots we love across India.

One of our main reasons for planning a trip to India was to try to catch a glimpse tigers in the wild, to better understand the dangers they’re facing, to learn more about their habitat and the other creatures who populate their turf. Finding information about tiger treks and India’s dozens of tiger preserves was a daunting task. (Do a quick Google search “tiger safari India” and you’re bound to find that none of the first page results point to the parks themselves. Instead you’ll be inundated by plenty of tour companies.) We spent hours online trying to suss out which sites pointed to actual park pages and which pages were purely promotional.

There were pros and cons for each of the reserves we looked at. We took into consideration the normal obvious factors (time of year, ease of getting to each park given flights in and out of the United States, etc.) and also did our best to research the success of tiger protection programs within the reserves, park management styles, overall tiger populations, tiger density, the type of habitat each park has because of its impact on visibility (Teak tree forests or sal? Tall grasses or open meadows? etc.) as well as the other animals and birds we might get to enjoy. Since seeing even a wisp of tiger fur is extremely unlikely, if you’re interested in going on a tiger trek, you may want to prioritize parks that have access to other animals (rhinos, birds, etc.) that you might also want to see.

We narrowed the field down to four promising reserves: Corbett, Kanha, Pench and Ranthambhore. All four parks had different advantages. Ranthambhore is known for its ancient ruins which make for a rather unique tiger hangout spot and gorgeous photos.

If you love animals as much as we do, here’s a list of some of the other critter focused wonders we’ve discovered around the globe.

Creatures who are even more endangered than tigers call Kanha home including what is now the most illegally trafficked mammal in the world, the critically endangered pangolin. Kanha is also home to vulnerable sloth bears and rare barasingha (in fact, Kanha is the last place on the planet you’ll find the exotic orange hued swamp deer).

Another source of inspiration for two of the four park candidates we researched was Rudyard Kipling’s 1894 classic, “The Jungle Book.” In the story, infant Mowgli roams a fictional location called Seeonee Hills, which may have been based on Seoni in the Indian state of Madhya Pradesh. Today Seoni is a far cry from Kipling’s jungle depictions (though perhaps “urban jungle” might be accurate given its bustling population of over 100,000). In Kipling’s era, Seoni connected the two modern day reserves, Pench and Kanha, making it a single jungle. Pench often gets cited as being where the book was based (likely because Seoni nestles in closer to Pench than it does to Kanha), but being Kipling’s jungle muse is perhaps a distinction both parks could both easily lay a claim to. It is worth noting that despite spending a number of years in India, Kipling reputedly never even visited Seoni and instead relied on the photos a close friend had taken of the area according to the Kipling Society.

In the end we landed on Kanha National Park. We spent three nights at Taj Hotel’s Banjaar Tola in Kanha. We did a total of four drives (two per day, one morning and one night, over two full days) and I wouldn’t have changed a single thing.

After spending time in Mumbai, Jaipur, Agra and then Delhi, we took an hour and 20 minute flight from Delhi to Jabalpur. From there it was a bumpy roller coaster of a five hour van drive to our camp. It was totally worth it. Set beside the peaceful Banjaar River on the edge of the park, our tented suites were far more luxurious and relaxing than any camp MacGyver could have whipped up.

Every last detail, even ones you might never have even thought to ask for, was lovingly attended to by the staff.

Warm bath drawn for you on the busiest night when every tent was full and searching for a warm respite from a dusty day’s drive? Check. Hot water bottles to keep you toasty during early morning safaris that started at 5:45am? Check.

Our first drive we didn’t see a tiger and it didn’t even matter. Our naturalist Sangita was so welcoming and passionate that we were immersed in the factoids she shared with us about the park and its inhabitants.

We saw chital (spotted deer) fighting,  langur monkeys swinging from branches, large sambar deer (or tiger tacos as I now call them) moving deftly through the sal forest, peacocks taking flight and immense wood spiders spinning webs that have even been known to capture small birds.

My first glimpse of orange through the trees wasn’t of a big cat, it was a muntjak (a barking deer) and I was thrilled. By the last night of our stay I would come to recognize the piercing bark the Labrador sized deers let loose when a tiger or leopard is near.

When I heard its shrill cry break the calm nighttime jungle hum three times in a row right before we headed back to our tent after dinner, every hair on the back of my neck stood up. My husband and I alerted a staffer, at first he smiled, but then he heard the bark with his own ears and a concerned look crossed his face before he (very) quickly ushered us to our room. The next morning we would find out that one of the two young cubs who lived across the river had mistakenly wandered on to our turf. That moment, along with dozens of incredible sites and sounds from our jungle adventure, will forever be etched in my memory.

Epic trips half way around the world aren’t for everyone. Time, money and a fear of the unknown are just a few of the hurdles that stand in the way. If you do ever have the opportunity or itch to head to India pack a camera and shoot photos of the tigers, or a sloth bear or even a pangolin for that matter, if you’re lucky enough to spot one.  Every photo, social media click and roar online helps spread the word that all of these animals desperately need our help and protection. Otherwise photos and stories might be the only thing left that remains of these magnificent creatures.