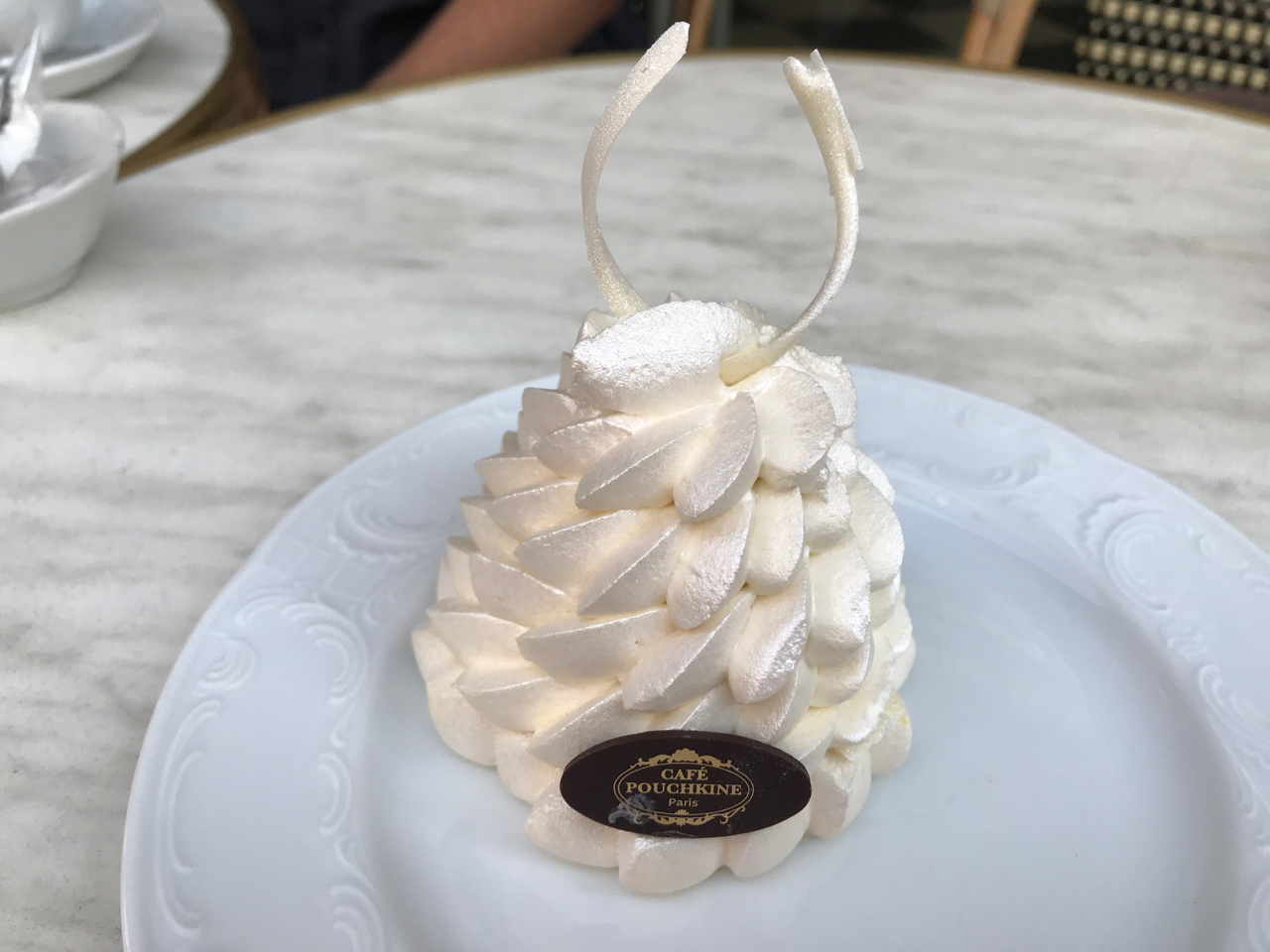 The list of delicious things to see and do in Paris is easily a mile long. From the delicate sablé kitsuné (fox shaped cookies) at chic Café Kitsune to the frogs’ legs at Michelin starred Le Taillevent, you can dine as low or high end as you’d like in the city of lights. If you’re craving cozy Russian cuisine in a chic Parisian atmosphere, Café Pouchkine is the perfect place for you to nestle into.

Andrey Dellos, an entrepreneur who hails from Moscow, opened the first Café Pouchkine in 1999.

The café gets its name from famed Russian poet Alexander Pouchkine and also from a fictional café that is mentioned in the lyrics of French singer Gilbert Bécaud’s song, “Nathalie.”

There are three Café Pouchkines in Paris. The Place de la Madeleine location serves as a tea room, a bar, a pastry shop, a restaurant and a Russian grocery store.

The “Pouchkinette” over on Rue des Petits Carreaux is the one we popped into.

More than 30 desserts can be found on the menu including elegant hazelnut chocolate cakes (cake chocolat noisette), croissants and even stunning pavlovas.

Clearly we love sweet stuff. Here are some of our favorite places to eat local and indulge in a sugar rush around the planet.

Sweet stuff isn’t the only thing you’ll find at Café Pouchkine. There are also traditional Russian dishes like beef stroganoff, borscht and piroshki that will help you stave off even the chilliest of Parisian winters. Caviar, ranging from the affordable to the astronomical in price, also makes an appearance on the menu.

In addition to Café Pouchkine, here’s a list of other neat little local spots we love across France.

If you decide to take a treat or two home, the luxurious packaging from Café Pouchkine is sure to impress. The pink, blue and brown stripes you see throughout the shop and along the bottoms of the menus are beautiful, but they also have a fun story behind them that ballet fans and Francophiles alike will appreciate.

The packaging was inspired La Bayadère, a famous Russian ballet from the 19th century which was first performed in St. Petersburg. The ballet was choreographed and reimagined by renowned Russian choreographer and dancer Rudolf Nureyev nearly a hundred years later in 1992, at the Paris Opera. If you’re looking for a reason to make your tastebuds dance, Café Pouchkine is one act you won’t want to miss in Paris.

*There are three Café Pouchkine locations in Paris.